Houston Living is a free app that provides GPS location-based government information, including:

• App users’ local elected official bios, websites and social media outlets;
• Nearby neighborhood organizations, associations or civic clubs to encourage homeowner civic involvement;
• Nearby real estate, including homes available for sale and market analysis of recent sales (via a link to HAR.com);
• Nearby city services and amenities, including public transportation options, parks and trails, public safety substations and library locations/hours;
• City news headlines and calendar of events;
• Social media communication from both the City of Houston and HAR.

“HAR worked with the City of Houston for nearly a year to develop a powerful mobile app specific to all that Houston has to offer socially and culturally and that also provides basic information about city services, government officials, neighborhoods and real estate,” said HAR Chairman Danny Frank with Prudential Anderson Properties. “Houston Living is really like several apps rolled into one and represents the first time a real estate association and municipality have engaged in this type of joint venture.” 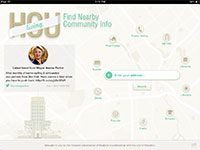 “This is an example of public/private collaboration at its very best,” said Mayor Annise Parker. “More people are moving to Houston than any other city in the nation. They need quick and easy access to real estate resources as well as general information about the city. This app meets the needs of our new residents while being equally valuable to those who’ve called Houston home for some time.” 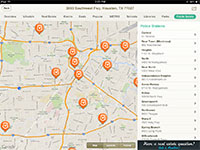 Development of Houston Living is part of HAR’s ongoing effort to demonstrate the vital role REALTORS® play in connecting homeowners, real estate consumers and local elected officials to the community. HAR serves as a leading advocate for homeownership and property ownership throughout Greater Houston. The app is designed to engage homeowners and real estate consumers by connecting them to elected officials who serve their area, the services provided by local government and the amenities in their neighborhoods.

Houston Living is available for free download at the Apple App Store/iTunes and soon will be downloadable from the Android Market.

Founded in 1918, the Houston Association of REALTORS® (HAR) is a 24,000-member organization of real estate professionals engaged in every aspect of the industry, including residential and commercial sales and leasing, appraisal, property management and counseling. It is the largest individual dues-paying membership trade association in Houston as well as the second largest local association/board of REALTORS® in the United States.