Supply of homes edges upward in July amid soaring sales

HOUSTON — (August 20, 2013) — The Houston real estate market extended its summer sizzle through July, with sales up for the 26th straight month. However unlike recent months, the inventory of available homes actually grew a bit and prices did not reach record highs, although they came very close.

According to the latest monthly report prepared by the Houston Association of REALTORS® (HAR), home sales rose 23.3 percent year-over-year, with contracts closing on 7,704 single-family homes. That is the highest one-month sales volume of all time, demonstrating that the insatiable appetite of home buyers shows no sign of abating. But sellers are making some moves of their own. Housing inventory ticked up from the 3.3-month supply recorded in June to 3.4 months, although that is down compared to the 5.3 months of supply in July 2012 and 3.6 months of supply at the beginning of this year.

The median price of a single-family home—the figure at which half the homes sold for more and half for less—rose 10.5 percent to $187,760. The average price increased 13.6 percent year-over-year to $260,968. That falls just shy of last month’s record high average price of $266,351. Both average and median prices represent the highest ever seen in a July in Houston.

All housing segments experienced gains in July except for the under-$80,000 market. Homes selling from $250,000 through the millions registered the greatest increase in sales volume.

“July was another off-the-chart month for home sales, and it really comes as no surprise given the additional job growth and other strong economic conditions that continue to draw more people to the greater Houston area,” said HAR Chairman Danny Frank with Prudential Anderson Properties. “Fortunately we are seeing more homes listed for sale, which should help bring the supply-and-demand scale into healthier balance as we enter the fall months when sales activity typically begins to slow down.”

In its latest report, the Texas Workforce Commission stated that the Houston metropolitan area added 97,900 net new jobs, a 3.6 percent increase in the 12 months ending July 2013. The Greater Houston Partnership notes that since the bottom of the recession, Houston has added 309,100 net new jobs, or 201.9 percent of the 153,100 jobs lost during the recession. No other major U.S. city has recouped a greater percentage of lost jobs.

Foreclosure property sales reported in the HAR Multiple Listing Service (MLS) declined 41.1 percent compared to July 2012. Foreclosures currently make up 7.8 percent of all property sales, down from 8.4 percent one month earlier and 19.6 percent at the beginning of the year. The median price of foreclosures jumped 18.8 percent to $94,500.

July sales of all property types in Houston totaled 9,186, a 26.3 percent increase over the same month last year. That marked the greatest one-month sales volume of the year and the second greatest of all time (the all-time high was 9,287 in June 2006). Total dollar volume for properties sold leapt 43.0 percent to $2.3 billion versus $1.6 billion a year earlier.

July brought more positive results to the Houston’s real estate market when comparing all sales categories to July of 2012. On a year-over-year basis, total property sales, total dollar volume and average and median pricing all rose.

Month-end pending sales totaled 4,419, an 8.3 percent gain over last year and a strong indicator of yet another month of increased sales when the August figures are tallied. Active listings, or the number of available properties, at the end of July declined 21.2 percent to 32,966. Houston’s inventory of available homes edged up from 3.3 months in June to 3.4 months in July, however that is markedly lower than the year-ago level of 5.3 months of inventory. The inventory of single-family homes across the United States currently stands at 5.2 months, according to the latest report from the National Association of REALTORS® (NAR).

July sales of single-family homes in Houston totaled 7,704, up 23.3 percent from July 2012. That marks the 26th consecutive monthly increase as well as the largest one-month sales volume of all time.

Home prices achieved the highest levels ever recorded in a July in Houston. The single-family median price rose 10.5 percent from last year to $187,760 and the average price climbed 13.6 percent year-over-year to $260,968. The average price is the second highest of all time, with the record high of $266,351 reached in June 2013. 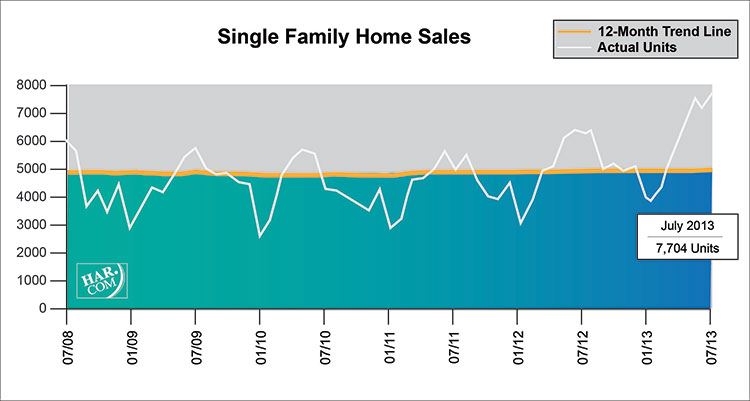 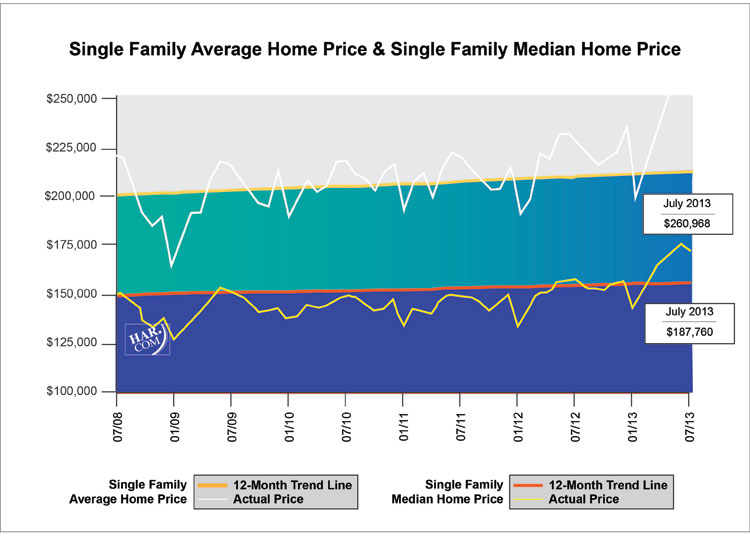 HAR also breaks out the sales performance of existing single-family homes throughout the Houston market. In July 2013, existing home sales totaled 6,917, a 30.0 percent jump from the same month last year. The average sales price rose 14.5 percent year-over-year to $251,152 while the median sales price climbed 12.1 percent to $179,000.

Houston’s lease property market saw more gains in July. Rentals of single-family homes rose 5.0 percent compared to July 2012 and year-over-year townhouse/condominium rentals climbed 7.7 percent. At $1,714, the average rent for single-family lease homes reached the highest price of all time. The average rent for townhouses/condominiums dipped from its record high of $1,499 in June to $1,492.

Houston Real Estate Milestones in July
The computerized Multiple Listing Service of the Houston Association of REALTORS® includes residential properties and new homes listed by REALTORS® throughout Harris, Fort Bend and Montgomery counties, as well as parts of Brazoria, Galveston, Waller and Wharton counties. Residential home sales statistics as well as listing information for more than 50,000 properties may be found on the Internet at https://www.har.com.