HOUSTON - (July 17, 2012) - Temperatures weren't the only thing sizzling in June. Consumers snapped up homes at the greatest volume in nearly five years, pushing average and median prices to record highs with increased volume in purchases of higher-end properties.

According to the latest monthly data prepared by the Houston Association of REALTORS® (HAR), single-family home sales rose 14.4 percent compared to June 2011. This makes June the 13th consecutive month of positive sales. The month also saw local housing inventory hold to its lowest level in more than five years.

"We see the strength of the Houston housing market as a direct reflection of improving consumer confidence in the local economy as a whole," said Wayne A. Stroman, HAR chairman and CEO of Stroman Realty. "One of the principal factors in the demand for homes throughout greater Houston has been steady job gains that the Texas Workforce Commission reports has amounted to more than 90,000 hires over the past year. In its July economic outlook, the Greater Houston Partnership said 'Houston is the strongest of all the major metro economies in the U.S., and if job growth continues at the current pace, this may be one of the best years on record for the region.'"

As occurred in May, brisk sales activity among homes priced from $250,000 and up pushed both average and median pricing to historic levels in June. The single-family home average price rose 4.6 percent year-over-year to $236,656, the highest level ever in Houston. The median price—the figure at which half of the homes sold for more and half sold for less—rose 6.9 percent to $171,000, which is also a record high.

Foreclosure property sales reported in the Multiple Listing Service (MLS) declined 2.9 percent year-over-year in June. Foreclosures comprised 16.8 percent of all property sales, a share that has steadily diminished each month since the 27.8 percent level recorded in January. The median price of June foreclosures fell 4.1 percent to $77,500.

June sales of all property types in Houston totaled 7,575, a 15.3 percent increase compared to June 2011. Total dollar volume for properties sold during the month jumped 20.2 percent to $1.7 billion versus $1.4 billion a year earlier.

June brought Houston's overall housing market positive results when all sales categories are compared to June 2011. On a year-over-year basis, total property sales, total dollar volume and average and median pricing were all up.

Month-end pending sales for June totaled 4,090. That is up 5.6 percent from last year and portends another month of advancing sales when the July real estate transactions are totaled. Active listings, or the number of available properties, at the end of June declined 17.8 percent from June 2011 to 42,207.

The June inventory of single-family homes held at the 5.5 months level it reached in May, which is the lowest level the Houston market has seen since March 2007. In June 2011, inventory stood at 7.9 months. It has remained below a six-month supply since December 2011. The 5.5-month figure compares favorably to the national inventory of single-family homes of 6.6 months recently reported by the National Association of REALTORSâ (NAR). This demonstrates that Houston continues to outpace the U.S. housing recovery that is underway. 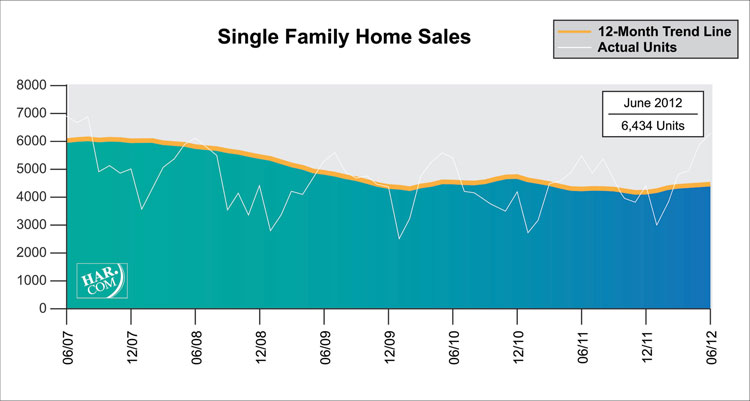 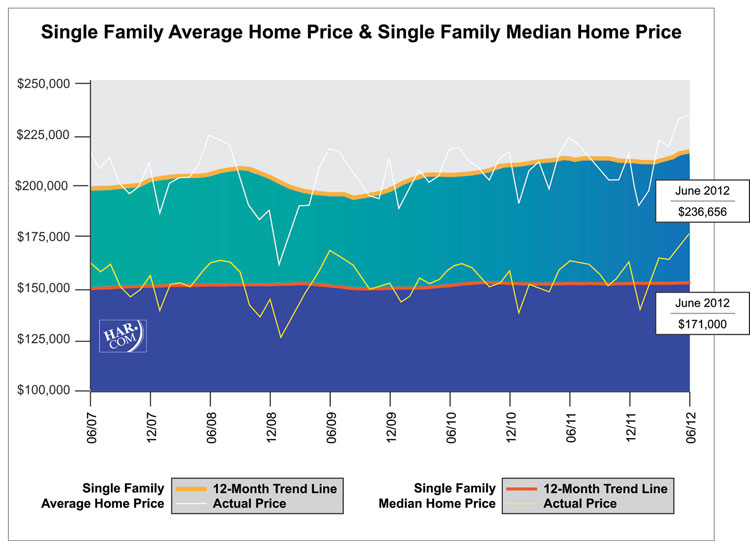 Strong sales activity among homes priced from $250,000 and above drove the average price of single-family homes up 4.6 percent from last June to $236,656, a record high for the Houston market. At $171,000, the median sales price for single-family homes increased 6.9 percent year-over-year, also establishing a new high.

HAR also breaks out the sales performance of existing single-family homes throughout the Houston market. In June 2012, existing home sales totaled 5,606, a 17.4 percent increase from June 2011. The average sales price rose 5.6 percent year-over-year to a record high of $227,918, and the median sales price increased 8.0 percent to $162,000.

Strong activity persisted in Houston's lease property market in June. Rentals of single-family homes climbed 15.9 percent compared to June 2011 and year-over-year townhouse/condominium rentals increased 13.5 percent. Rents in Houston are at their highest levels ever, with the average rent among single-family homes reaching $1,641 per month in June and the average rent among townhouses/condominiums coming in at $1,408 per month.