HOUSTON — (June 21, 2011) — The 2010 home buyer tax credit continues to obscure an accurate gauge of how the Houston real estate market is performing. The 2010 federal incentive triggered a short-term surge in local home sales last spring that has skewed the year-over-year analysis most of this year.

When compared to the tax credit incentivized closed sales of May 2010, there were fewer home sales recorded in May 2011, according to the Multiple Listing Service (MLS) report prepared by the Houston Association of REALTORS® (HAR). At the same time, the number of listings that went under contract this May and expected to close in the next 30 to 60 days was up more than 35 percent when compared to May 2010—yet another comparison that is skewed by the tax credit that required buyers to enter purchase contracts by the April 30, 2010 deadline.

"Getting an accurate read on the Houston real estate market remains challenging because the 2010 tax credit prompted a surge in home sales during the first half of last year that otherwise would have occurred throughout the summer," said Carlos P. Bujosa, HAR chairman and VP at Transwestern.

Volume continued to soar among rental properties, confirming reports that while many new residents may be moving to the greater Houston area, they are as yet unable or unwilling to buy a home possibly due to more stringent mortgage lending requirements, an inability to sell the homes they've left behind, or a combination of these or other factors.

According to the latest HAR report, May single-family home sales fell 11.9 percent versus one year earlier. However, the 5,043 single-family homes that did sell represent the highest monthly volume recorded since June 2010, just after the tax credit expired. The under-$80,000 and above-$500,000 segments of the market experienced increased sales last month.

May sales of all property types in Houston totaled 5,948, down 11.2 percent compared to May 2010. Total dollar volume for properties sold during the month declined 6.7 percent to $1.2 billion versus $1.3 billion one year earlier.

The month of May brought Houston's overall housing market mixed results when all listing categories are compared to May of 2010. Total property sales and total dollar volume declined on a year-over-year basis while both average and median prices increased to the highest levels for a May in Houston.

Month-end pending sales for May totaled 4,049, up 35.4 percent from last year. While a rise in pendings typically portends higher demand in the following month's sales, the May report is seen more as a reflection of the rapid pace at which 2010 sales went under contract in advance of the tax credit closing deadline. Pendings are therefore expected to remain high as long as the distortive effects of the tax credit linger.

The number of available properties, or active listings, at the end of May edged up 0.9 percent from May 2010 to 51,652. The inventory of single-family homes rose to 8.0 months compared to 6.8 months one year earlier. That means that it would take 8.0 months to sell all the single-family homes on the market based on sales activity over the past year. The figure still compares favorably to the national inventory of single-family homes of 9.2 months reported by the National Association of REALTORS® (NAR). Local months inventory rose from 7.0 months to 8.4 months in the 12-month period following the expiration of the tax credit.

May sales of single-family homes in Houston totaled 5,043, down 11.9 percent from May 2010. This follows 14.1 percent, 5.1 percent and 1.8 percent declines in April, March and February respectively, and an 8.4 percent jump in January that marked the first increase in seven months. However, the May number represents the greatest monthly volume of single-family homes recorded in Houston since June 2010.

When compared to May of 2009, a year in which there were no unusual real estate market influences such as Hurricane Ike in 2008 and the home buyer tax credit in 2010, single-family home sales were up 5.5 percent. On a year-to-date basis, sales are down 6.5 percent. 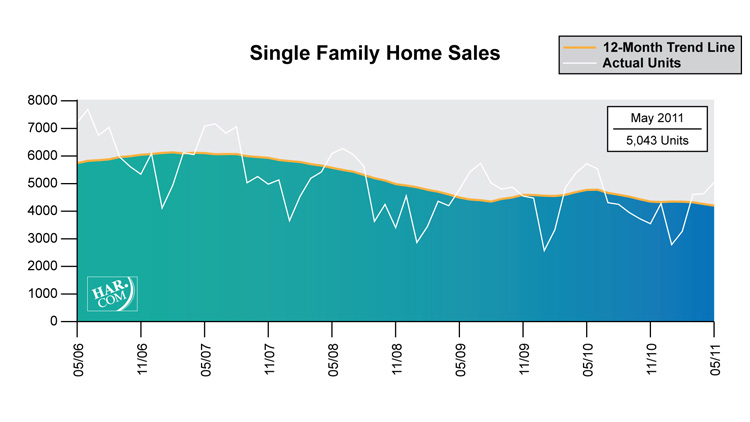 Average and median prices attained the highest levels for a May in Houston as well as the highest levels so far in 2011. At $220,210, the average price of single-family homes rose 6.5 percent in May compared to one year earlier. At $157,900, the median sales price for single-family homes increased 3.2 percent versus May 2010. The national single-family median price reported by NAR is $163,200, illustrating the continued higher value and lower cost of living available to consumers in Houston. 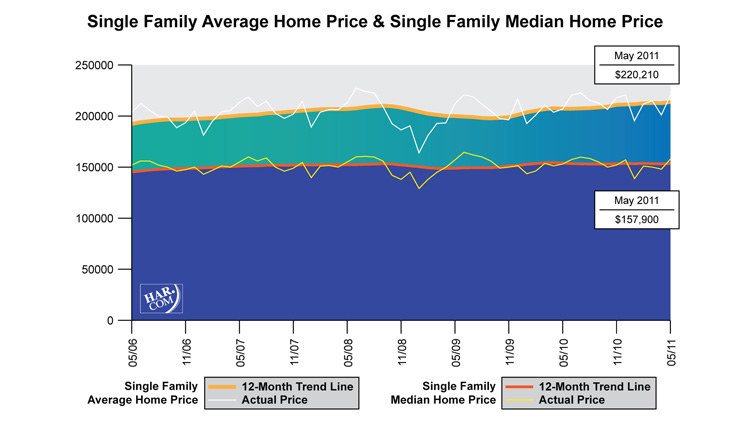 HAR also breaks out the sales performance of existing single-family homes throughout the Houston market. In May 2011, existing home sales totaled 4,382, an 8.9 percent decline from May 2010. The average sales price climbed 7.9 percent to $209,352 compared to last year and the median sales price of $148,000 rose 2.1 percent.

The number of townhouses and condominiums that sold in May dropped 20.7 percent compared to one year earlier. That became the fourth straight monthly sales decline for this housing type following a 14.7 percent hike in January. In the greater Houston area, 441 units were sold last month versus 556 properties in May 2010. 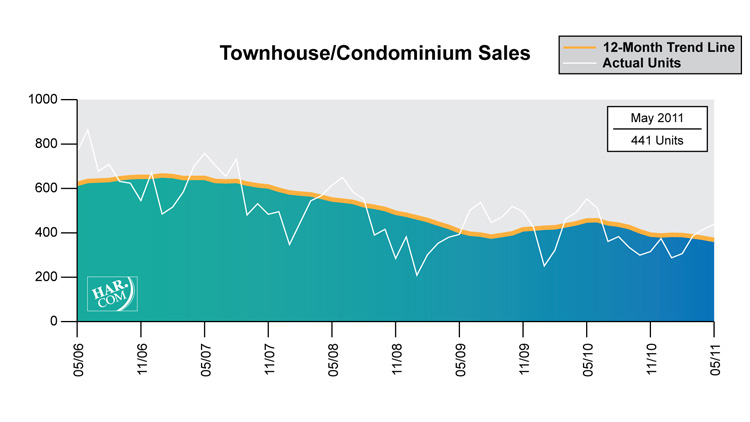 Demand for single-family home rentals continued to surge in May, rising 19.9 percent compared to one year earlier. Year-over-year townhouse/condominium rentals jumped 24.6 percent. With Houston's healthier employment climate, this demand has been largely driven by a steady influx of consumers from other parts of the country that may be waiting to sell the homes from which they've moved or who may be getting their finances in order before making a local home purchase. According to the Texas Workforce Commission, the 10-county Houston-Sugar Land-Baytown Metropolitan Statistical Area has created 97,200 new jobs since January 2010, recouping 63.6 percent of the jobs lost during the recession.

Houston Real Estate Milestones in May