HOUSTON — (May 15, 2012) — The Houston housing market experienced continued growth in April as home buyers helped support an 11th consecutive month of positive sales. The volume of single-family home sales was the greatest for a single month since last August, and average and median pricing achieved the highest levels for an April in Houston.

According to the latest monthly data prepared by the Houston Association of REALTORS® (HAR), April sales of single-family homes climbed 9.6 percent versus one year earlier. That marks the second biggest monthly increase of 2012.

"The Houston real estate market continues to benefit from a healthy economic climate led primarily by the addition of 96,000 new jobs locally in the past 12 months, according to the Texas Workforce Commission," said Wayne A. Stroman, HAR chairman and CEO of Stroman Realty. "Increases in pending home sales along with declines in active listings continue to keep our housing inventory at the lowest levels we've seen in more than three years."

Foreclosure property sales reported in the Multiple Listing Service (MLS) fell 10.1 percent year-over-year in April. Foreclosures comprised 18.8 percent of all property sales, which is down dramatically from the 27.8 percent level recorded at the beginning of the year. The median price of foreclosures in April ticked up 1.1 percent to $79,900.

April sales of all property types in Houston totaled 6,156, an increase of 9.9 percent compared to April 2011. Total dollar volume for properties sold during the month soared 21.2 percent to $1.3 billion versus $1.1 billion a year earlier.

Month-end pending sales for April totaled 4,059. That is up 7.8 percent from last year and is thought to portend another month of positive sales when the May real estate transactions are tallied. The number of available properties, or active listings, at the end of April declined 17.8 percent from April 2011 to 42,525.

The inventory of single-family homes has remained below a six-month supply since last December, coming in at 5.7 months in April versus 7.8 months a year earlier. The last time months inventory fell below the six-month mark was between December 2008 and February 2009. The 5.7-month figure is better than 6.4-month national inventory of single-family homes recently reported by the National Association of REALTORS® (NAR). These indicators continue to illustrate that Houston has a balanced real estate marketplace.
* Months inventory estimates the number of months it will take to deplete current active inventory based on the prior 12 months sales activity. This figure is representative of the single-family homes market.

April sales of single-family homes in Houston totaled 5,136, up 9.6 percent from April 2011. This marks the 11th consecutive monthly increase. 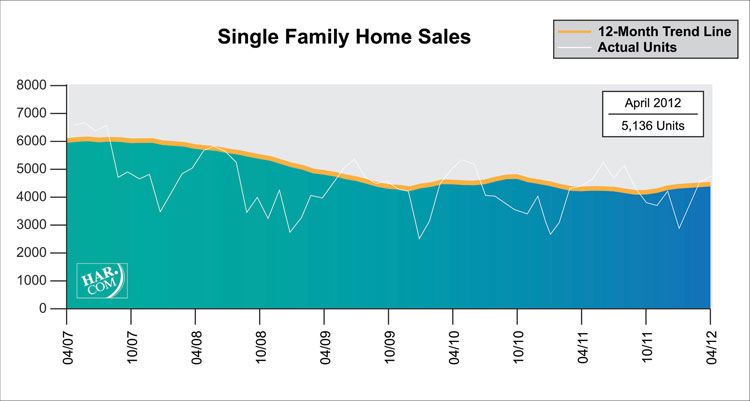 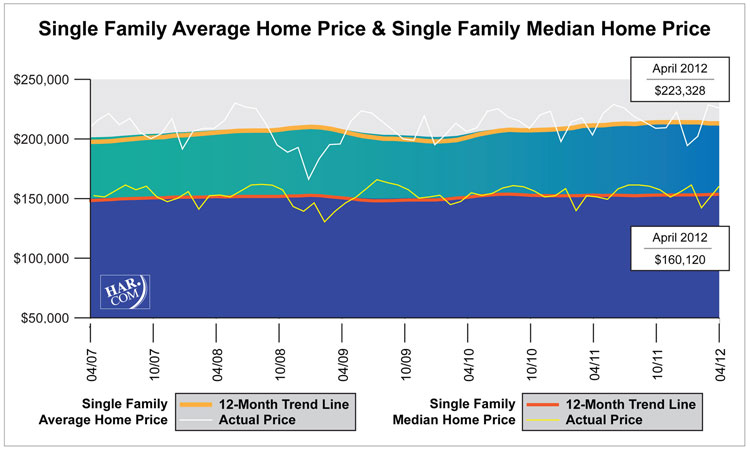 At $223,328, the average price of single-family homes rose 11.2 percent from last April, resulting from a surge in sales activity among homes priced from $250,000 and above and a decline in the sales of homes priced below $80,000. The average price achieved an April high for the Houston market. At $160,120, the median sales price for single-family homes increased 8.2 percent year-over-year, also achieving an April highpoint.

HAR also breaks out the sales performance of existing single-family homes throughout the Houston market. In April 2012, existing home sales totaled 4,317, a 9.1 percent increase from April 2011. The average sales price rose 11.4 percent from last year to $210,807 and the median sales price increased 9.0 percent to $149,900.

The number of townhouses and condominiums that sold in April leapt 12.4 percent compared to one year earlier. In the greater Houston area, 472 units were sold last month versus 420 properties in April 2011.

Demand for lease properties tapered in April for the first time in more than a year. Single-family home rentals ticked up 1.5 percent compared to April 2011 earlier and year-over-year townhouse/condominium rentals declined 8.7 percent.