HOUSTON — (May 17, 2011) — The boost that the federal home buyer tax credit gave the Houston housing market in April 2010 continues to overshadow local home sales one year later. Sales of homes declined in April 2011 along with average and median prices, however volume rose among rental properties.

According to the latest monthly data compiled by the Houston Association of REALTORS® (HAR), April single-family home sales fell 14.2 percent versus one year earlier. Only the under-$80,000 segment of the market experienced increased sales, which weighed down pricing. Compared to April of 2009, a year with no unusual market factors such as Hurricane Ike in 2008 and the 2010 tax credit, single-family home sales were up 10.1 percent.

The average price of a single-family home dipped 0.6 percent from April 2010 to $202,545. The April single-family home median price—the figure at which half of the homes sold for more and half sold for less—declined 2.2 percent year-over-year to $148,000.

Foreclosure property sales reported in the Multiple Listing Service (MLS) decreased 4.6 percent in April compared to one year earlier. Foreclosures comprised 22.0 percent of all property sales in April, down from 23.5 percent in March. The median price of April foreclosures fell 10.4 percent to $79,700 on a year-over-year basis.

April sales of all property types in Houston totaled 5,534, down 12.0 percent compared to April 2010. Total dollar volume for properties sold during the month declined 12.8 percent to $1.1 billion versus $1.2 billion one year earlier.

"The April home sales figures remain skewed, as this was the period last year when the final push was on for consumers to beat the April 30 home buyer tax credit deadline," said Carlos P. Bujosa, HAR chairman and VP at Transwestern. "We see tremendous interest in the Houston housing market as local employment numbers strengthen, particularly among rental properties, which give consumers an option until they are ready to enter the market as buyers."

The month of April brought Houston's overall housing market largely negative results when all listing categories are compared to April of 2010. Total property sales, total dollar volume and both average and median prices declined on a year-over-year basis.

Month-end pending sales for April totaled 3,745, down 18.8 percent from last year. That suggests the likelihood of lower demand when the May figures are totaled. The number of available properties, or active listings, at the end of April rose 5.8 percent from April 2010 to 51,694. The increase in available housing pushed the April inventory of single-family homes to 7.8 months compared to 6.5 months one year earlier. That means that it would take 7.8 months to sell all the single-family homes on the market based on sales activity over the past year. The figure still compares favorably to the national inventory of single-family homes of 8.4 months reported by the National Association of REALTORS® (NAR).

April sales of single-family homes in Houston totaled 4,625, down 14.2 percent from April 2010. This follows 5.3 percent and 2.2 percent declines in March and February respectively, and an 8.3 percent jump in January, which marked the first increase in seven months. When compared to April of 2009, a year in which there were no unusual real estate market influences such as Hurricane Ike in 2008 and the home buyer tax credit in 2010, single-family home sales were up 10.1 percent.

Strong sales volume in the under-$80,000 home segment weighed down pricing. At $202,545, the average price of single-family homes dipped 0.6 percent compared to one year earlier. At $148,000, the median sales price for single-family homes declined 2.2 percent versus April 2010. The national single-family median price reported by NAR is $160,500, illustrating the continued higher value and lower cost of living available to consumers in Houston. 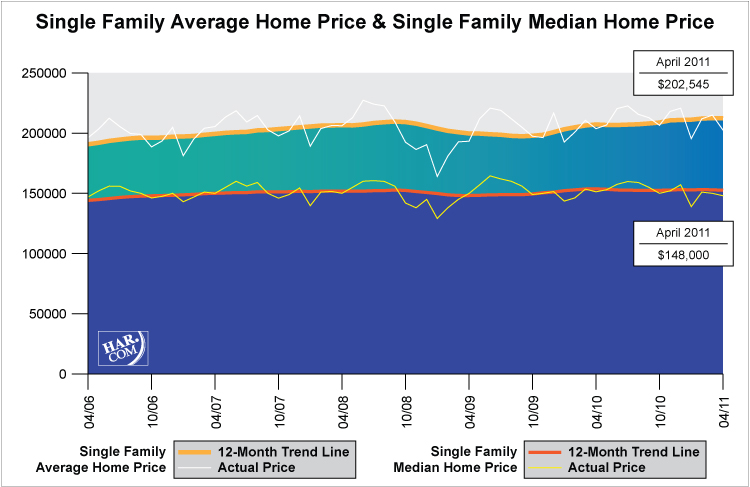 HAR also breaks out the sales performance of existing single-family homes throughout the Houston market. In April 2011, existing home sales totaled 3,963, a 11.6 percent drop from April 2010. The average sales price ticked up 0.6 percent to $191,807 compared to last year and the median sales price of $138,000 fell 2.8 percent.

The number of townhouses and condominiums that sold in April dropped 15.2 percent compared to one year earlier. In the greater Houston area, 419 units were sold last month versus 494 properties in April 2010.