HOUSTON — (April 9, 2014) — If there’s a depleted supply of homes for sale in Houston, you wouldn’t know it from the market’s new monthly home sales figures. March brought about the 34th consecutive month of positive home sales, despite the record low 2.6-month supply of inventory that has prevailed throughout 2014.

According to the latest monthly report prepared by the Houston Association of Realtors (HAR), home sales rose 3.7 percent year-over-year, with March single-family home sales totaling 5,971. That is the largest one-month sales volume recorded since last September.

The average price of a single-family home increased 11.0 percent year-over-year to $261,329. The median price—the figure at which half the homes sold for more and half for less—climbed 9.8 percent to $189,900. Both figures represent the highest prices Houston has ever seen in a March.

Single-family homes priced from $250,000 through the millions saw the greatest sales activity and accounted for the latest jump in prices. Homes priced at $150,000 and below experienced declines.

“Houston home sales rose again in March, with most of the buying taking place at the higher end of the market,” said HAR Chair Chaille Ralph with Heritage Texas Properties. “We’ve also seen ongoing strength in the leasing market, which illustrates that many consumers continue to take advantage of available lease property. We are happy that there hasn’t been any further decline in the local supply of homes and are hopeful that new construction and seasonal spring listings will help our inventory grow.”

Foreclosure property sales reported in the HAR Multiple Listing Service (MLS) continued their freefall, dropping 45.3 percent compared to March 2013. Foreclosures now comprise 6.8 percent of all property sales, down from a 12.3 percent share a year earlier. The median price of foreclosures rose 8.7 percent to $93,500.

Month-end pending sales totaled 4,596, a 3.7 percent increase versus last year, which portends another bump in sales when the April numbers are tallied. Active listings, or the number of available properties, at the end of March declined 14.1 percent to 28,085.

Houston’s housing inventory has remained flat at a 2.6-month supply since December 2013, but is down from the 3.5 months of supply one year ago. The inventory of single-family homes across the country is currently 5.2 months, according to the latest report from the National Association of Realtors.

March sales of single-family homes in Houston totaled 5,971. That is an increase of 3.7 percent from March 2013 and accounts for the market’s 34th consecutive monthly increase. It also represents the greatest one-month sales volume since September 2013.

Home prices reached the highest levels ever recorded for a March in Houston. The single-family median price climbed 9.8 percent from last year to $189,900 and the average price jumped 11.0 percent year-over-year to $261,329. 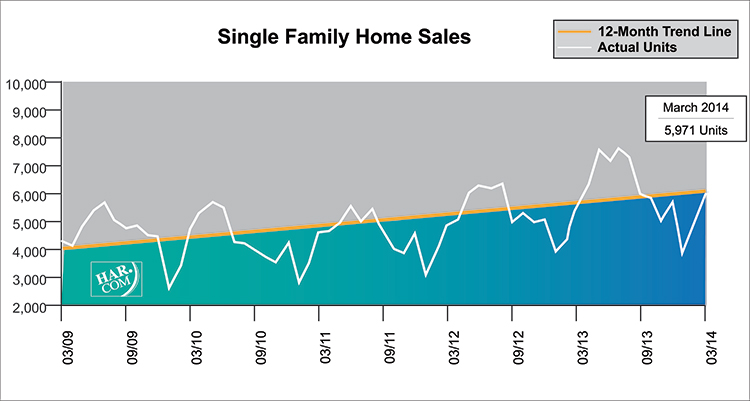 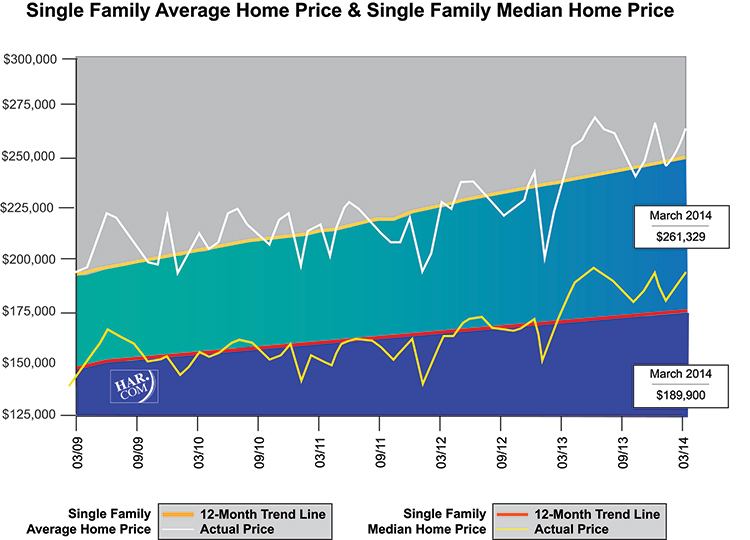 HAR also breaks out the sales performance of existing single-family homes for the Houston market. In March 2014, existing home sales totaled 5,093, a 6.3 percent increase from the same month last year. The average sales price rose 10.2 percent year-over-year to $243,286 while the median sales price increased 10.1 percent to $175,000.

Townhouse and condominium sales in March declined 4.2 percent from one year earlier, marking the first decline since March 2012. A total of 524 units sold last month compared to 547 properties in March 2013. The average price shot up 20.6 percent to $209,737 and the median price increased 12.9 percent to $158,000. Inventory slid to a 2.7 months supply versus a 3.7 months supply in March 2013. However, it is a slight improvement from the 2.5 and 2.6 months supply recorded in January and February, respectively.

Houston Real Estate Milestones in March
The computerized Multiple Listing Service of the Houston Association of REALTORS® includes residential properties and new homes listed by REALTORS® throughout Harris, Fort Bend and Montgomery counties, as well as parts of Brazoria, Galveston, Waller and Wharton counties. Residential home sales statistics as well as listing information for more than 50,000 properties may be found on the Internet at https://www.har.com.