HOUSTON — (April 17, 2012) — The Houston real estate market enjoyed a tenth consecutive month of rising sales in March, with homes continuing to sell quickly enough to keep housing inventory at its lowest level since December 2008. Average and median prices achieved the highest levels for a March in Houston, with the average price coming just a few dollars shy of the all-time high set in June 2008.

According to the latest monthly data prepared by the Houston Association of REALTORS® (HAR), March sales of single-family homes rose 7.8 percent versus one year earlier. That follows February's 15.6 percent jump which was the biggest sales boost since last September. Declining sales of homes priced below $80,000 combined with increased activity in the luxury housing segment fueled the pricing gains.

"March was an excellent month for home sales in Houston and the healthy appreciation in pricing is welcome news as well," said Wayne A. Stroman, HAR chairman and CEO of Stroman Realty. "Inventory remains at its lowest level in more than three years and is outpacing the national real estate market. The moderation in pending sales in March could possibly translate to a leveling off of sales before we enter the summer buying season, but we will know for sure next month."

The March single-family home average price rose 5.7 percent year-over-year to $227,270, the highest level for a March in Houston and only $70 below the all-time high reached in June 2008. The median price—the figure at which half of the homes sold for more and half sold for less—climbed 7.8 percent to $161,750, also a record high for a March in Houston.

Foreclosure property sales reported in the Multiple Listing Service (MLS) fell 12.8 percent year-over-year in March. Foreclosures comprised 19.6 percent of all property sales, which is down from the 21.1 percent level observed over the past 12 months. The median price of foreclosures in February was flat at $81,500.

March sales of all property types in Houston totaled 5,908, an increase of 7.4 percent compared to March 2011. Total dollar volume for properties sold during the month soared 15.2 percent to $1.3 billion versus $1.1 billion a year earlier.

Month-end pending sales for March totaled 4,162. That is down a fractional 0.7 percent from last year and may suggest a slight tapering of sales when the April housing data are compiled. The number of available properties, or active listings, at the end of March declined 17.8 percent from March 2011 to 41,997. For the second month in a row, the inventory of single-family homes held to the lowest level since December 2008-5.6 months. That compares to 7.5 months one year earlier and means that selling the entire inventory single-family homes currently on the market would take 5.6 months to complete based on the past year's sales activity. The figure is superior to the national inventory of single-family homes of 6.4 months recently reported by the National Association of REALTORS® (NAR). These indicators continue to demonstrate that Houston has a balanced real estate marketplace.
* Months inventory estimates the number of months it will take to deplete current active inventory based on the prior 12 months sales activity. This figure is representative of the single-family homes market.

March sales of single-family homes in Houston totaled 4,996, up 7.8 percent from March 2011. This marks the tenth consecutive monthly increase. 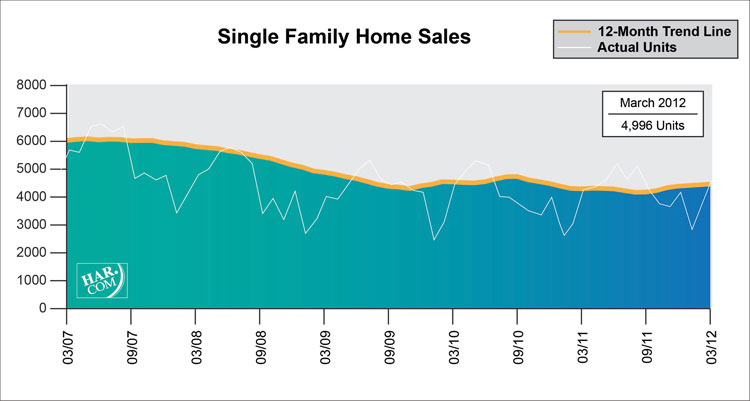 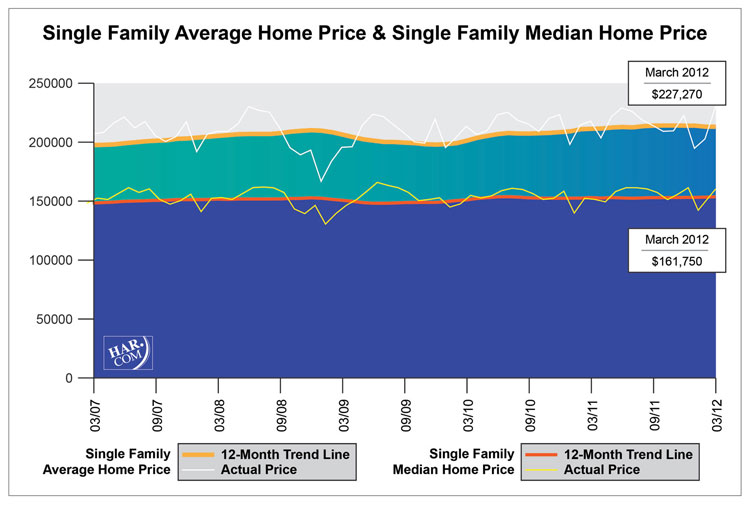 At $227,270, the average price of single-family homes rose 5.7 percent from last March, resulting from a combination of increased sales activity among luxury homes and a decline in the sales of homes priced below $80,000. The average price achieved a March high but fell just shy of the historic level of $227,340 reached in June 2008. At $161,750, the median sales price for single-family homes climbed 7.8 percent year-over-year, also achieving a high-point for a March in Houston.

HAR also breaks out the sales performance of existing single-family homes throughout the Houston market. In March 2012, existing home sales totaled 4,088, a 6.3 percent increase from March 2011. The average sales price rose 6.5 percent from last year to $212,524 and the median sales price increased 7.4 percent to $145,000.

The number of townhouses and condominiums that sold in March declined 3.6 percent compared to one year earlier. In the greater Houston area, 374 units were sold last month versus 388 properties in March 2011.