NO SLOWDOWN IN SIGHT FOR THE HOUSTON HOUSING MARKET

HOUSTON — (March 19, 2013) — Home buyers kept Houston-area REALTORS® hopping in February, generating a 15.5 percent increase in sales compared to the same month last year, according to the latest monthly data compiled by the Houston Association of REALTORS® (HAR). The buying spree held local housing inventory to the same level as January — 3.6 months — which is the lowest supply of homes on the market since December 1999.

February marked the 21st consecutive month of increased home sales, with average and median prices reaching the highest levels for a February in Houston.

Contracts closed on 4,407 single-family homes during the month. All housing segments saw gains except for those priced below $80,000. That suggests the likelihood of an exhausted supply of available homes at that price point. Homes selling from $250,000 to $500,000 registered the greatest sales volume increase, accounting for the price appreciation.

“The recent flurry of home buying and reduced inventory may seem unusual, but is exactly what the Houston market experienced back in the late 1990s,” said HAR Chairman Danny Frank with Prudential Anderson Properties. “The difference is that now we are seeing multiple offers and bidding wars. We are still in a seller’s market, and I would advise anyone who is considering selling their home to consult a REALTOR® who can price it right and handle all the details and paperwork, including sorting through whatever offers may come in.”

The single-family home average price increased 9.6 percent year-over-year to $220,445, the highest level for a February in Houston. The median price—the figure at which half of the homes sold for more and half sold for less—rose 7.9 percent to $161,700, also a record high for a February.

Foreclosure property sales reported in the HAR Multiple Listing Service (MLS) declined 23.4 percent compared to February 2012. Foreclosures currently make up 15.8 percent of all property sales, down from 19.6 percent one month earlier. The median price of foreclosures climbed 7.7 percent to $85,000.

February sales of all property types in Houston totaled 5,324, a 17.2 percent increase over the same month last year. Total dollar volume for properties sold rocketed 26.5 percent to $1.1 billion versus $887 million a year earlier.

February delivered positive results to Houston’s overall real estate market when all sales categories are compared to February 2012. On a year-over-year basis, total property sales, total dollar volume and average and median pricing were all up.

Month-end pending sales for February totaled 3,877. That is up 12.7 percent from last year and signals the probability of yet further growth in property sales when the March figures are tallied. Active listings, or the number of available properties, at the end of February declined 20.9 percent from February 2012 to 33,361.

Housing inventory in Houston has now held at 3.6 months for two consecutive months. That is the lowest level since December 1999. Inventory first fell below a five-month supply in August 2012 and then tumbled below a four-month supply last December. The inventory of single-family homes across the United States stands at 4.2 months, according to the latest report from the National Association of REALTORS® (NAR).

February sales of single-family homes in Houston totaled 4,407, up 15.5 percent from February 2012. That marks the 21st straight monthly increase. 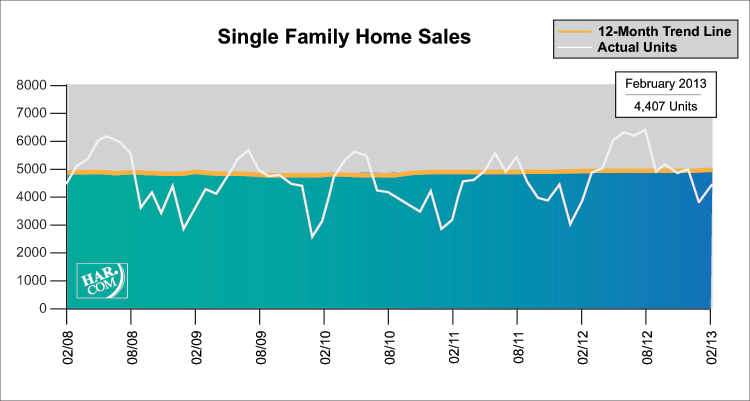 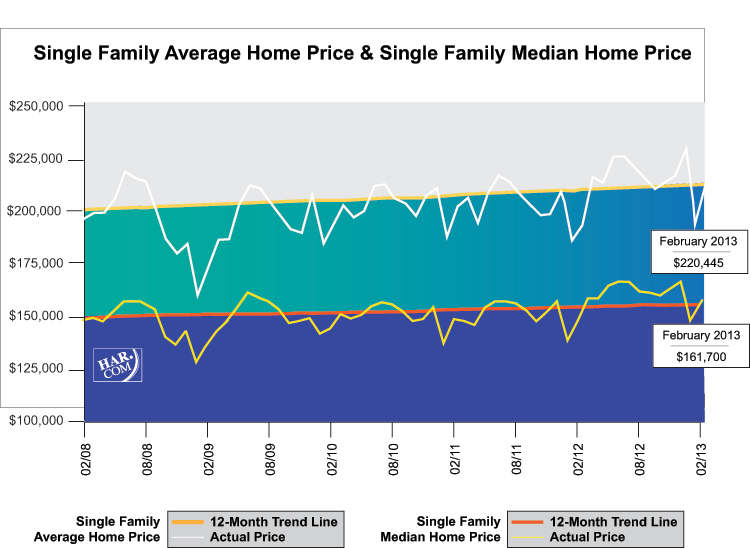 HAR also breaks out the sales performance of existing single-family homes throughout the Houston market. In February 2013, existing home sales totaled 3,769, a 22.4 percent increase from the same month last year. The average sales price rose 10.4 percent year-over-year to $205,305 while the median sales price shot up 13.6 percent to $150,000.

Houston’s lease property market experienced declines in February. Rentals of single-family homes fell 16.3 percent compared to February 2012 and year-over-year townhouse/condominium rentals were down by 4.5 percent. The average rent for single-family lease homes was $1,515 while it was $1,397 for townhouses/condominiums – representing increases of 6.6 percent and 10.9 percent respectively.

Houston Real Estate Milestones in February
The computerized Multiple Listing Service of the Houston Association of REALTORS® includes residential properties and new homes listed by REALTORS® throughout Harris, Fort Bend and Montgomery counties, as well as parts of Brazoria, Galveston, Waller and Wharton counties. Residential home sales statistics as well as listing information for more than 50,000 properties may be found on the Internet at https://www.har.com.