HOUSTON — (March 20, 2012) — February marked the ninth consecutive month of positive home sales across the greater Houston area, and properties sold at a brisk enough pace to drive housing inventory to its lowest level since December 2008. The month also saw the trademarks of a healthy real estate market continue to prevail—a decline in active property listings and rise in pending sales.

February sales of single-family homes soared 16.9 percent versus one year earlier, according to the latest monthly data prepared by the Houston Association of REALTORS® (HAR). That is the biggest sales boost since August 2011. A surge in sales among homes priced between $80,000 and $250,000 combined with flat sales in the luxury housing segment allowed the average and median price to retreat slightly.

"The Houston housing market continues to show welcomed strength at the end of February 2012," said Wayne A. Stroman, HAR chairman and CEO of Stroman Realty. "In addition to all the positive indicators in HAR's February report, Houston is reaping the benefits of great economic news in the form of more than 76,000 jobs created over the past year, according to the Texas Workforce Commission. It stands to reason that with new jobs being filled, these employees and their families will need housing."

February's single-family home median price—the figure at which half of the homes sold for more and half sold for less—dipped a fractional 0.7 percent year-over-year to $149,900. The average price fell 4.6 percent from February 2011 to $201,945.

Foreclosure property sales reported in the Multiple Listing Service (MLS) increased 21.1 percent year-over-year in February. Foreclosures comprised 23.2 percent of all property sales, which is consistent with the levels observed over the past 12 months. The median price of foreclosures in February was unchanged at $79,000.

February sales of all property types in Houston totaled 4,561, up 15.8 percent compared to February 2011. Total dollar volume for properties sold during the month rose 13.4 percent to $894 million versus $788 million one year earlier.

The month of February brought Houston's overall housing market positive results when all sales categories are compared to February 2011. Total property sales and total dollar volume rose on a year-over-year basis. The median price declined less than one percent while the average price fell 4.6 percent.

Month-end pending sales for February totaled 3,445. That is up 13.5 percent from last year and suggests another month of positive sales when the March housing data are tallied. The number of available properties, or active listings, at the end of February declined 15.3 percent from February 2011 to 42,206. The inventory of single-family homes dropped to its lowest level since December 2008—5.6 months, compared to 7.3 months one year earlier. That means selling all the single-family homes on the market would take 5.6 months to complete based on the past year's sales activity. The figure is better than the national inventory of single-family homes of 6.1 months reported by the National Association of REALTORS® (NAR). These indicators all continue to reflect a healthy and balanced real estate marketplace for Houston.
* Months inventory estimates the number of months it will take to deplete current active inventory based on the prior 12 months sales activity. This figure is representative of the single-family homes market.

February sales of single-family homes in Houston totaled 3,832, up 16.9 percent from February 2011. This marks the ninth consecutive monthly increase and the biggest hike since last August. 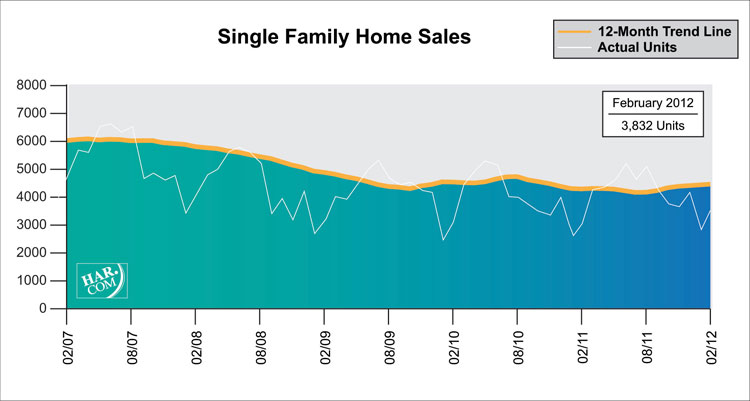 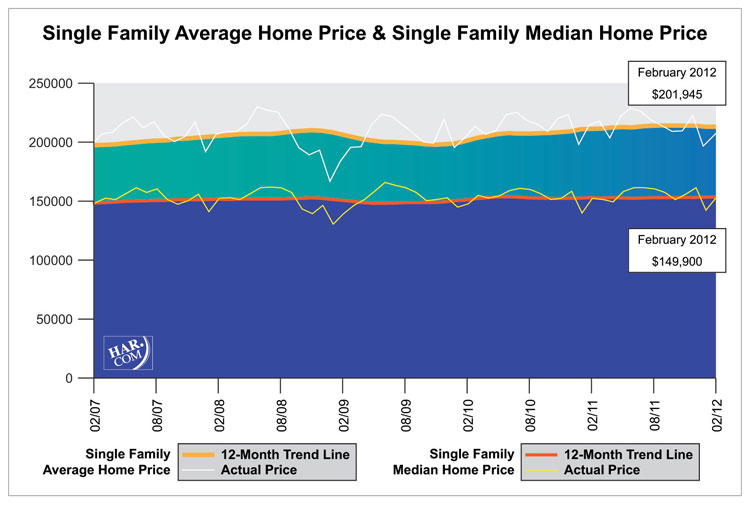 At $201,945, the average price of single-family homes slid 4.6 percent from last February, resulting from a combination of heavy sales activity among homes in the middle price segments and flat luxury home sales. At $149,900, the median sales price for single-family homes declined a fractional 0.7 percent year-over-year. The national single-family median price reported by NAR is $154,700, illustrating the continued higher value and lower cost of living available to consumers in Houston.

HAR also breaks out the sales performance of existing single-family homes throughout the Houston market. In February 2012, existing home sales totaled 3,141, a 16.0 percent increase from February 2011. The average sales price declined 4.3 percent from last year to $187,371 and the median sales price also declined 2.9 percent to $134,000.

The number of townhouses and condominiums that sold in February rose 2.9 percent compared to one year earlier. In the greater Houston area, 319 units were sold last month versus 310 properties in February 2011.

Lease properties throughout the Houston market continue to be in high demand. Single-family home rentals rose 21.1 percent in February compared to one year earlier and year-over-year townhouse/condominium rentals climbed 19.6 percent.