HOUSTON – (February 21, 2012) — The Houston housing market held to positive territory as 2012 began, with January marking the eighth consecutive month of increased home sales. The year also opened with a continued decline in active property listings and growth in pending sales—a combination that signals a healthy market with a balanced supply of housing inventory, and that puts Houston on enviable footing compared to many other markets around the U.S. that are slowly recovering from the housing downturn.

January sales of single-family homes climbed 9.2 percent versus one year earlier, according to the latest monthly data prepared by the Houston Association of REALTORS® (HAR). All segments of the housing market grew except the luxury segment—those homes priced from $500,000 and above—whose decline flattened the overall average price.

"The January report shows continued strength in the Houston housing market that we began seeing in the latter part of 2011, and it gives us cause for optimism as we look ahead to the typically active spring and summer buying months," said Wayne A. Stroman, HAR chairman and CEO of Stroman Realty. "We have also seen more jobs being filled locally and you generally don't experience a strong real estate market without healthy employment."

January's single-family home median price—the figure at which half of the homes sold for more and half sold for less—rose 0.9 percent year-over-year to $139,900. The average price of $194,765 was statistically unchanged from January 2011.

Foreclosure property sales reported in the Multiple Listing Service (MLS) increased 22.0 percent year-over-year in January. Foreclosures comprised 27.8 percent of all property sales, which is higher than the 2011 average of 21.0 percent. The median price of foreclosures in January was flat at $82,550.

January sales of all property types in Houston totaled 3,632, up 4.8 percent compared to January 2011. Total dollar volume for properties sold during the month rose 5.9 percent to $683 million versus $645 million one year earlier.

The month of January brought Houston's overall housing market positive results when all sales categories are compared to January 2011. Total property sales and total dollar volume rose on a year-over-year basis. The median price rose while the average price was flat.

Month-end pending sales for January totaled 3,164. That is up 6.0 percent from last year and suggests another positive month of sales when the February figures are tallied. The number of available properties, or active listings, at the end of January declined 15.1 percent from January 2011 to 42,067. The inventory of single-family homes dropped to its lowest level since December 2009—5.7 months, compared to 7.2 months one year earlier. That means it would take 5.7 months to sell all the single-family homes on the market based on sales activity over the past year. The figure is significantly better than the national inventory of single-family homes of 7.2 months reported by the National Association of REALTORS® (NAR). These indicators all continue to reflect a balanced real estate marketplace for Houston.
* Months inventory estimates the number of months it will take to deplete current active inventory based on the prior 12 months sales activity. This figure is representative of the single-family homes market.

January sales of single-family homes in Houston totaled 3,049, up 9.2 percent from January 2011. This marks the eighth consecutive monthly increase. 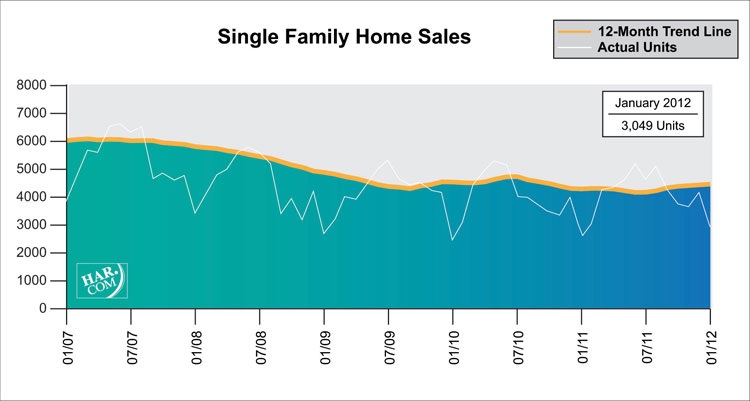 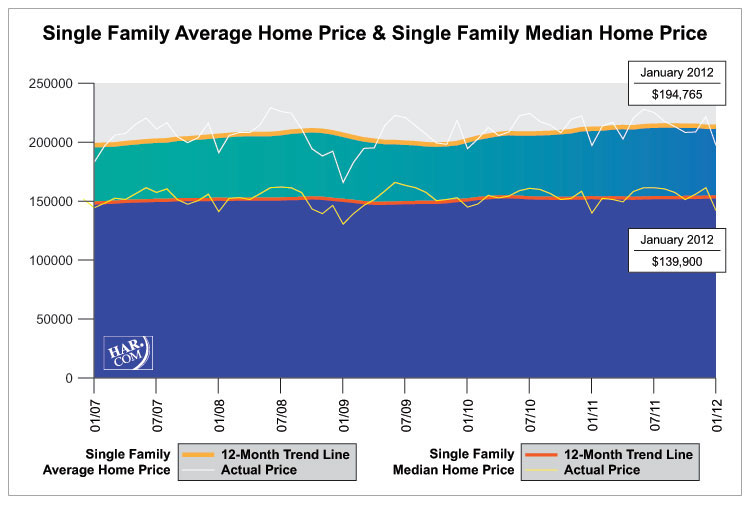 At $194,765, the average price of single-family homes was statistically unchanged from last January, resulting from the lower volume of luxury home sales. At $139,900, the median sales price for single-family homes rose 0.9 percent year-over-year. The national single-family median price reported by NAR is $164,500, illustrating the continued higher value and lower cost of living available to consumers in Houston.

The number of townhouses and condominiums that sold in January fell 6.2 percent compared to one year earlier. In the greater Houston area, 271 units were sold last month versus 289 properties in January 2011.

Single-family home rentals rose 15.3 percent compared to one year earlier and year-over-year townhouse/condominium rentals climbed 15.6 percent. This is consistent with increases in the leasing market recorded throughout 2011.