HOUSTON — (December 18, 2012) — Houston homes continued to sell at an unprecedented pace in November, plunging the supply of available properties to levels last seen 12 years ago. The added demand sent average and median home prices to historic highs for a November in Houston.

All housing segments saw gains in November except for the low end of the market—those homes priced at $80,000 and below. Homes priced from $250,000 through the millions registered the greatest sales volume and accounted for the month's jump in prices.

"Homes are selling at an unusually hefty pace for this time of year, and that has left fewer properties on the market and driven up prices," said Wayne A. Stroman, HAR chairman and CEO of Stroman Realty. "With continued local job growth and historically low interest rates, this aggressive home buying trend is likely to continue into the new year. Homebuilders now face the challenge of meeting the demand."

Foreclosure property sales reported in the HAR Multiple Listing Service (MLS) declined 8.9 percent compared to November 2011. Foreclosures recorded the lowest one-month sales volume of the year in November, making up 15.0 percent of all property sales. This is seen as a likely reflection of the continued slowdown in the sales of homes priced under $80,000. The median price of November foreclosures ticked up 1.0 percent to $81,100.

November sales of all property types in Houston totaled 5,891, a 27.9 percent increase over the same month last year. Total dollar volume for properties sold in November leapt 41.2 percent to $1.3 billion versus $926 million a year earlier.

Month-end pending sales for November totaled 3,267. That is up 8.4 percent from last year and signals the likelihood of continued gains when December property sales data are totaled. However, it is a significantly smaller increase than last month's 24.6 percent year-over-year gain in pending sales and suggests an easing in the pace of sales. Active listings, or the number of available properties, at the end of November declined 19.0 percent from November 2011 to 36,539.

Housing inventory in Houston has remained below a five-month supply since August of this year, dropping in November to 4.1 months from 6.2 months a year earlier. That is the lowest level recorded locally since December 2000. By contrast, the highest months inventory in recent history was 8.2 in June 1996. For perspective, the national inventory of single-family homes is 5.4 months, according to the National Association of REALTORS® (NAR).

November sales of single-family homes in Houston totaled 4,978, up 27.3 percent from November 2011. That marks the 18th consecutive monthly increase. 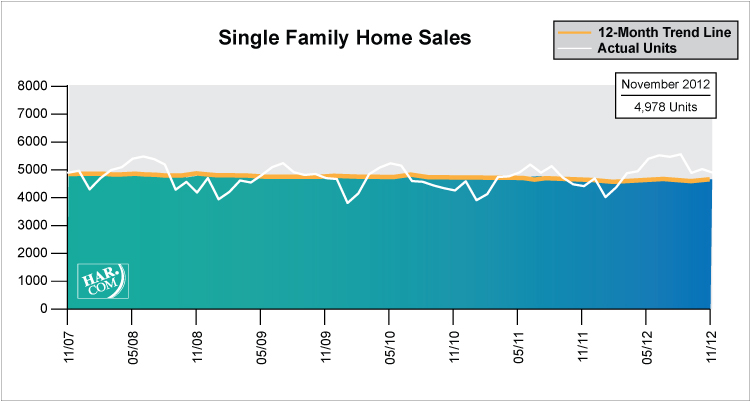 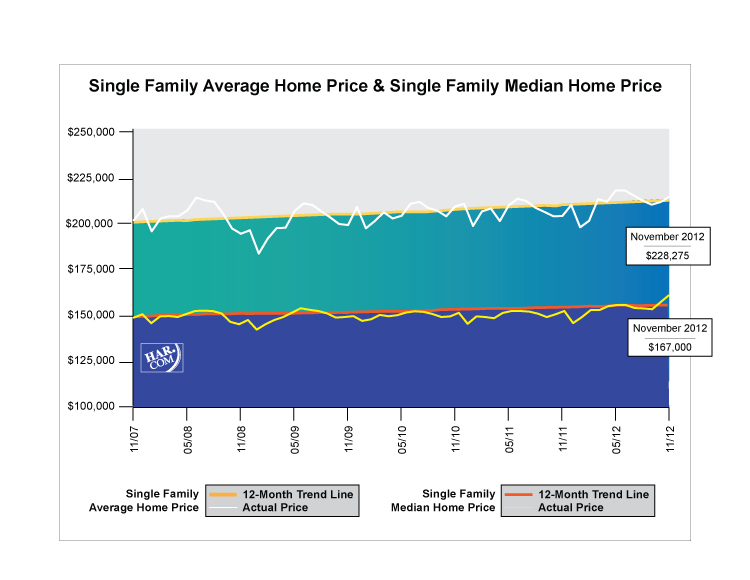 November sales of townhouses and condominiums soared 39.6 percent from one year earlier. A total of 441 units sold last month versus 316 properties in November 2011. The average price increased 8.3 percent to $187,500 while the median price declined a fractional 0.4 percent to $135,000. Months inventory dove 36.6 percent year-over-year to 4.7 months compared to 7.4 months in November 2011.