HOUSTON — (December 21, 2010) — For the fifth month in a row following expiration of the 2010 homebuyer tax credit, sales of single-family homes across Greater Houston declined in November while the prices of those homes rose. Despite the lingering sales chill, the market enjoyed boosts in both the average and median price, achieving the highest levels ever seen in a November.

According to the latest monthly data compiled by the Houston Association of REALTORS® (HAR), November sales of single-family homes throughout the Houston market fell 22.0 percent when compared to November 2009. However, on a year-to-date basis, 2010 single-family home sales are off just 5.6 percent from 2009 levels. Positive sales activity was recorded in the low and high ends of the housing market, with declines affecting homes priced between $80,000 and $500,000.

Foreclosure property sales reported in the Multiple Listing Service (MLS) declined 9.3 percent in November compared to one year earlier. Foreclosures comprised 19.6 percent of all property sales in November—2.3 percent less than the month before and generally consistent with the levels they have maintained for much of 2010. The median price of November foreclosures fell 15.3 percent to $78,750 on a year-over-year basis.

November sales of all property types in Houston totaled 4,200, down 22.2 percent compared to November 2009. Total dollar volume for properties sold during the month was $906 million versus $1.0 billion one year earlier, representing an 11.6 percent drop.

"The November report suggests to me that the Houston real estate market is taking a considerable amount of time to recover from the end of the whirlwind pace of sales triggered earlier this year by the homebuyer tax credit," said Margie Dorrance, HAR chair and principal at Keller Williams Realty Metropolitan. "Bright spots in the housing report include what appears to be improvement in pending sales and, of course, the continued price appreciation not seen in most other markets. The next couple of months will hopefully enable us to gauge the overall market performance that we can expect in 2011."

The month of November brought Houston's overall housing market mixed results when all listing categories are compared to November of 2009. Total property sales and total dollar volume fell on a year-over-year basis while the average and median single-family home sales prices rose.

Month-end pending sales for November totaled 2,583, down 5.8 percent from last year, suggesting another month of lower demand when the December figures are tallied. However, the November decline was a dramatic improvement from the 23.2 percent and 17.2 percent hits the market suffered in October and September, respectively. The number of available properties, or active listings, at the end of November rose 14.1 percent from November 2009 to 51,875. The growth in available inventory coupled with declining sales volume pushed the November inventory of single-family homes to 7.6 months compared to 6.0 months one year earlier. The figure is still the lowest in six months and remains favorable compared to the national inventory of single-family homes of 10.5 months reported by the National Association of REALTORS® (NAR).

November sales of single-family homes in Houston totaled 4,200, down 22.0 percent from November 2009. This marks the fifth monthly decline in sales volume following four consecutive months of accelerated sales attributed largely to the tax credit. However, on a year-to-date basis, single-family home sales are off 5.6 percent from 2009 levels. 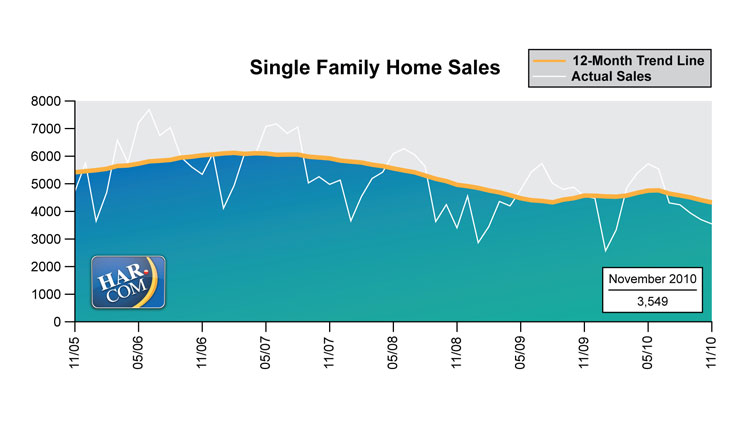 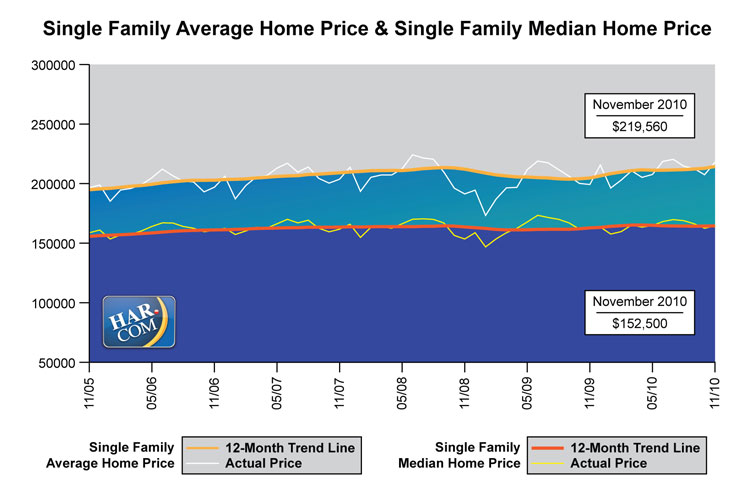 HAR also breaks out the sales performance of existing single-family homes throughout the Houston market. In November 2010, existing home sales totaled 2,914, a 21.0 percent decline from November 2009. The average sales price climbed 15.6 percent to $209,080 compared to last year, while the median sales price of $139,250 was flat.

The number of townhouses and condominiums that sold in November fell 36.6 percent compared to one year earlier. In the greater Houston area, 315 units were sold last month versus 497 properties in November 2009. 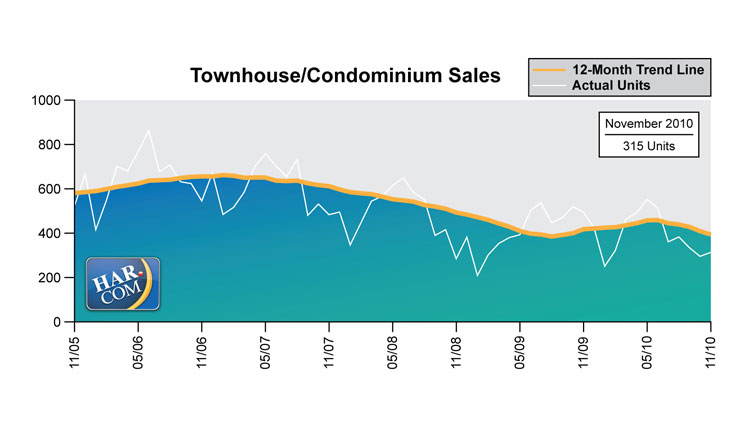