HOUSTON — (November 12, 2014) — The Houston real estate market plowed through October at full-throttle, driving prices up once again and ensuring that the supply of homes remained at historic lows. The greatest sales activity took place among homes priced between $250,000 and the millions.

According to the latest monthly report prepared by the Houston Association of Realtors (HAR), single-family home sales totaled 6,639 units, an increase of 12.3 percent compared to October 2013. Months of inventory, an approximation of how long it will take to deplete the current active housing inventory based on the previous 12 months of sales, dipped to a 2.8-months supply versus a 3.1-months supply last October. That is down slightly from a 2.9-months supply in September 2014 and compares to the current national supply of 5.3 months of inventory.

Home prices climbed to record highs for an October. The average price of a single-family home jumped 9.8 percent year-over-year to $262,013. The median price—the figure at which half the homes sold for more and half for less—rose 8.3 percent to $192,000.

“Most Realtors are not accustomed to this brisk a pace of home sales in Houston this late in the year,” said HAR Chair Chaille Ralph with Heritage Texas Properties. “This is typically when thoughts turn to the holidays and sales volume slows. Much of this year has defied prediction, but what helped the market keep up with buyer demand in October was an 11.1 percent increase in new listings.”

Job growth continues to serve as one of the principal drivers of the Houston housing market. The November edition of the Greater Houston Partnership’s (GHP) Economy at a Glance reports that employment in the greater Houston area grew 4.3 percent in the 12 months ending September 2014, leading the nation’s major metro areas in the pace of job growth. The report cites U.S. Bureau of Labor Statistics data stating that the Houston metro-area created 120,700 jobs on a seasonally adjusted basis, a close second to the 129,100 jobs added in the New York metro area during the same period. “This level of job creation is remarkable given that Houston is home to 2.9 million jobs, a third of New York’s 8.8 million jobs,” the GHP report concludes.

October delivered across-the-board gains for the Houston real estate market, with total property sales, total dollar volume and average and median pricing all up when compared to October 2013.

Month-end pending sales for all property types totaled 4,355. That is up 9.0 percent compared to last year and is considered a harbinger of more positive sales activity when the November sales figures are tallied. Active listings, or the number of available properties, at the end of October was 28,333, 10.4 percent below last year.

Home prices reached record highs for an October in Houston. The single-family average price increased 9.8 percent from last year to $262,013 and the median price climbed 8.3 percent year-over-year to $192,000. The number of days it took a home took to sell¬, or Days on Market, was 51 versus 57 last October. In July 2014, it reached a record low of 45 days. 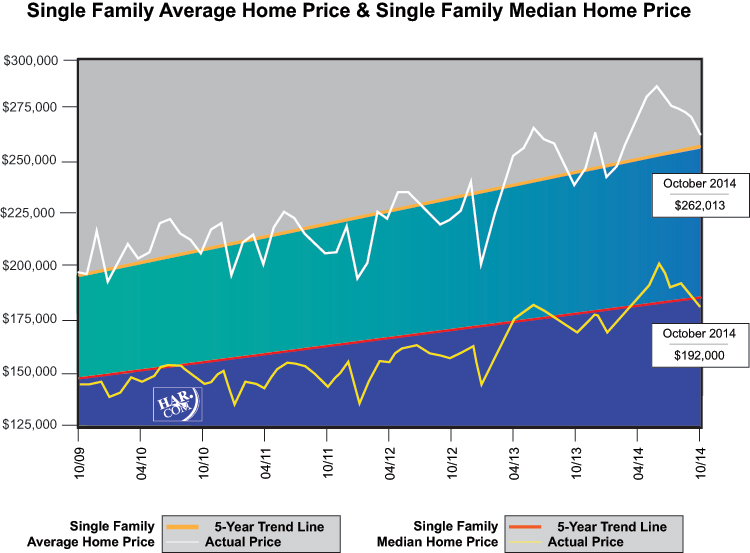 HAR also breaks out the sales figures for existing single-family homes. In October, existing home sales totaled 5,746. That is up 14.9 percent from the same month last year. The average sales price increased 8.7 percent year-over-year to $241,287 while the median sales price rose 8.8 percent to $179,500.

Sales of townhouses and condominiums jumped 12.4 percent in October versus one year earlier. A total of 634 units sold last month compared to 564 properties in October 2013. The average price increased 3.1 percent to $193,635 and the median price shot up 9.9 percent to $147,750. Inventory matched September’s 2.5-months supply but was down compared to the 2.9-months supply a year earlier.

Demand for lease properties persisted in October as inventory of for-sale properties shrank. Single-family home rentals climbed 13.1 percent compared to October 2013, while year-over-year townhouse/condominium rentals were unchanged. The average rent for a single-family home was up 4.0 percent to $1,711 and the average rent for a townhouse/condominium was up 8.5 percent at $1,592.

Houston Real Estate Milestones in October
The computerized Multiple Listing Service of the Houston Association of REALTORS® includes residential properties and new homes listed by 29,000 REALTORS® throughout Harris, Fort Bend and Montgomery counties, as well as parts of Brazoria, Galveston, Waller and Wharton counties. Residential home sales statistics as well as listing information for more than 50,000 properties may be found on the Internet at https://www.har.com.