SUPPLY OF HOUSTON HOMES EVAPORATES IN OCTOBER AS SALES SOAR

HOUSTON — (November 20, 2012) — The number of homes on the market in Houston reached the lowest level in more than a decade in October, thanks to a surge in sales that also lifted prices to the highest levels ever for an October.

Single-family home sales skyrocketed 32.7 percent compared to October 2011, according to the latest monthly data prepared by the Houston Association of REALTORS® (HAR), and accounted for the 17th consecutive month of positive sales. Contracts closed on 5,379 homes, driving inventory down to 4.4 months, a level last seen in December 2001. All segments of the housing market saw gains in October, with the steepest among homes priced above $250,000.

"Home sales throughout Houston were incredibly strong in October and sent the supply of homes down to 4.4 months, which is the lowest level we've observed in 11 years," said Wayne A. Stroman, HAR chairman and CEO of Stroman Realty. "Our active real estate market reflects the general health of the Houston economy, most notably the addition of close to 96,000 new jobs over the past year, according to the latest Texas Workforce Commission employment report. The inventory squeeze has definitely created fertile ground for homebuilders."

Foreclosure property sales reported in the Multiple Listing Service (MLS) declined 10.9 percent compared to October 2011. Foreclosures made up 15.5 percent of all property sales, the lowest one-month sales volume of the year and a likely reflection of the continued slowdown in the sales of homes priced below $80,000. The median price of October foreclosures rose 6.3 percent to $85,000.

October sales of all property types in Houston totaled 6,457, a staggering 35.1 percent increase over October 2011. Total dollar volume for properties sold during the month shot up 47.2 percent to $1.4 billion versus $945 million a year earlier.

Month-end pending sales for October totaled 3,854. That is up 24.6 percent from last year and signals the likelihood of further gains when November's property sales data are totaled. Active listings, or the number of available properties, at the end of October declined 18.8 percent from October 2011 to 37,909.

Housing inventory in Houston first fell below a six-month supply in December 2011 and has remained below the five-month level for the past three months, dropping in October from 6.6 months a year earlier to 4.4 months. That is the lowest level observed locally since December 2001. For perspective, the national inventory of single-family homes is 5.9 months, according to the National Association of REALTORS® (NAR). A supply of less than six months is traditionally defined as a "seller's market," although buyers have been able to continue taking advantage of historically low mortgage interest rates.

October sales of single-family homes in Houston totaled 5,379, up 32.7 percent from October 2011. That marks the 17th consecutive monthly increase and represents the second longest stretch of positive sales in Houston real estate history. The first was a 37-month sales run that ended in February 2007, prior to the recession. 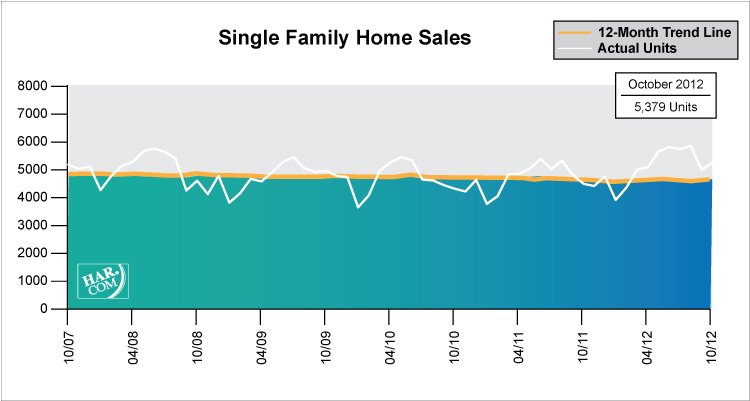 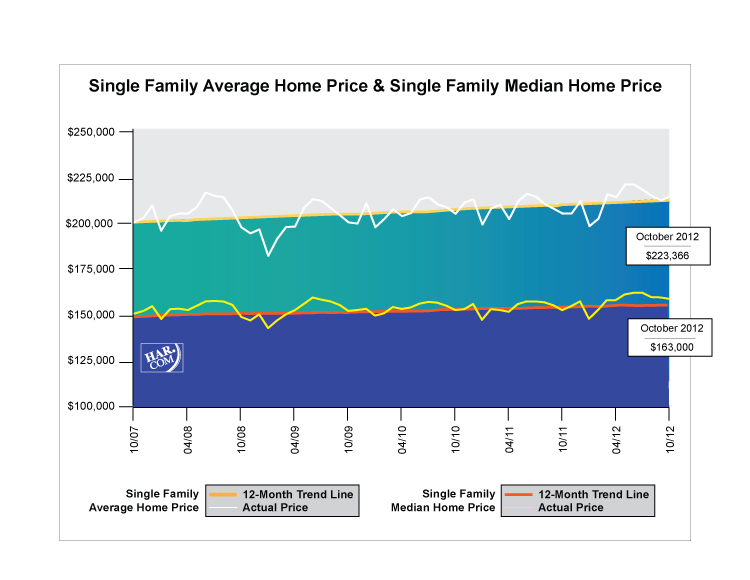 The average price of a single-family home rose 8.3 percent from last year to $223,366, the highest level for an October in Houston. The highest and second highest average prices of all time were recorded in May and June of this year, respectively. At $163,000, the median sales price for single-family homes also achieved a record high for an October in Houston, up 8.7 percent year-over-year.