THE HOUSTON REAL ESTATE MARKET ZOOMS INTO RECORD TERRITORY IN 2013

HOUSTON — (January 21, 2014) — The Houston real estate market ended 2013 as it began: in the fast lane. Surging home sales throughout Greater Houston were largely driven by the addition of more than 86,000 jobs that drew buyers and renters from all around the country and world. December marked the 31st straight month of positive home sales and was a month in which prices again rose and housing inventory shrunk to new record lows.

According to the latest monthly data prepared by the Houston Association of REALTORS® (HAR), December single-family home sales increased 14.3 percent versus December 2012. Contracts closed on 5,813 homes, driving inventory down to 2.6 months supply, the lowest level of all time.

All housing segments saw gains in December except for the low end of the market—those homes priced at $80,000 and below. Homes priced from $250,000 and above registered the highest sales volume and accounted for another hike in prices.

“The Houston housing market had its best year on record in 2013, and those of us who work in real estate have never been busier,” said HAR Chair Chaille Ralph with Heritage Texas Properties. “Stewart Title Chief Economist and former HAR Chairman Dr. Ted C. Jones forecasts positive sales to continue in the new year, but at a slower pace. He anticipates about a 5 percent increase in home sales and a 6 percent gain in pricing. However, all that hinges on having homes to sell, and the local inventory is running extremely low.”

The single-family home average price rose 10.3 percent year-over-year to $265,017 while the median price—the figure at which half of the homes sold for more and half sold for less—rose 10.9 percent to $188,500. Both figures represent historic highs for a December in Houston.

Sales of foreclosure properties continued their year-long decline, falling 48.8 percent compared to December 2012, according to the HAR Multiple Listing Service (MLS). Foreclosures currently make up 6.5 percent of all property sales reported through the MLS, one-third of the share they comprised at the beginning of 2013. The median price of December foreclosures increased 8.3 percent to $91,000

December sales of all property types in Houston totaled 6,987, a 14.2 percent increase over the same month last year. Total dollar volume for properties sold in December soared 24.2 percent to $1.8 billion versus $1.4 billion a year earlier.

December delivered positive results across all sales categories compared to December 2012. On a year-over-year basis, total property sales, total dollar volume and average and median pricing were all on the rise. Active listings, or the number of available properties, at the end of December declined 16.1 percent from December 2012 to 28,147.

Housing inventory in Houston has been below a four-month supply since November 2012. It fell below a three-month supply in November 2013, dropping in December to a 2.6-month supply from 3.7 months a year earlier. That is the lowest level ever recorded locally. Inventory consisting of a 6.0-month supply is typically regarded as constituting a balanced real estate market. For perspective, the national inventory of single-family homes is 5.1 months of supply, according to the National Association of REALTORS® (NAR).

December sales of single-family homes in Houston totaled 5,813, up 14.3 percent from December 2012. That marks the 31st consecutive monthly increase. 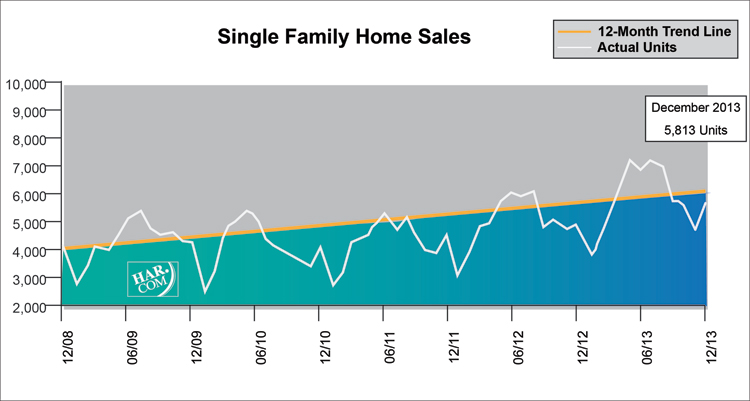 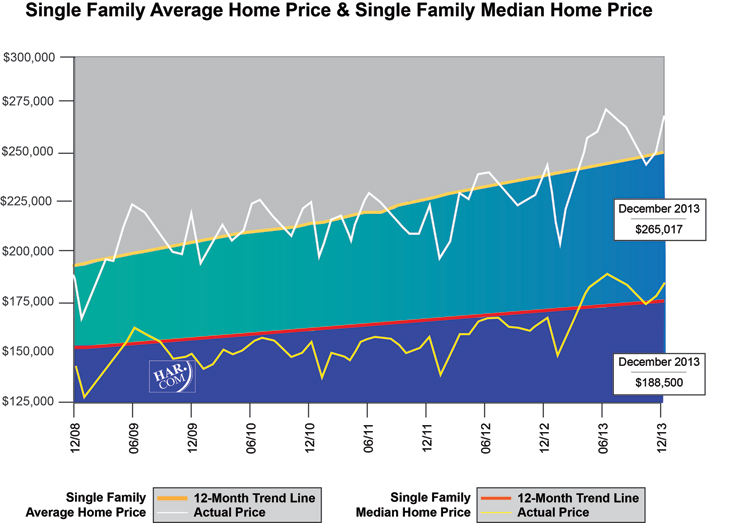 The average price of a single-family home rose 10.3 percent from last year to $265,017, the highest level ever for a December in Houston. At $188,500, the median sales price for single-family homes also achieved an historic high for December, up 10.9 percent year-over-year.

December demand was hot for Houston’s lease property market. Rentals of single-family homes rose 7.8 percent compared to December 2012, while year-over-year townhouse/condominium rentals increased 9.8 percent. The average rent among single-family lease homes remained stable throughout the year, recorded at $1,612 in December. The December average rent for a townhouse/condominium rose 12.0 percent to $1,476 per month.

Houston Real Estate Milestones in December
The computerized Multiple Listing Service of the Houston Association of REALTORS® includes residential properties and new homes listed by REALTORS® throughout Harris, Fort Bend and Montgomery counties, as well as parts of Brazoria, Galveston, Waller and Wharton counties. Residential home sales statistics as well as listing information for more than 50,000 properties may be found on the Internet at https://www.har.com.