HOUSTON — (August 10, 2016) — The greater Houston real estate market experienced its first sales decline in six months in July, with the sharpest drop in volume reported among homes on the highest and lowest ends of the pricing spectrum.

According to the latest monthly report prepared by the Houston Association of Realtors (HAR), a total of 7,204 homes sold in July compared to 7,898 a year earlier. That represents a drop of 8.8 percent, the first decline since January. However, on a year-to-date basis, home sales are still up about one percent compared to this point in 2015.

Inventory levels continue to outpace last year, rising from a 3.5-months supply to 4.0 months. That is the largest supply of homes since November 2012 when it stood at 4.1 months.

"We never like to see a decline in home sales, but itâ€™s helpful to remember that our comparisons each month are to a record year in 2015," said HAR Chairman Mario Arriaga with First Group. "July was the first time in several months when even mid-range housing saw declines. Itâ€™s hard to identify a single cause for the drop in sales, whether itâ€™s a possible trickle-down effect of falling oil prices or prospective buyers holding out, but Houstonâ€™s housing market is still healthy overall, and HAR will continue to monitor conditions as we transition into the fall months."

The single-family home median priceâ€”the figure at which half of the homes sold for more and half sold for lessâ€”rose 4.1 percent to $230,000. That is the highest median price ever for a July and the second highest of all time. The highest median ever was $233,000, reached in June of this year. The average price declined a fractional 0.5 percent in July to $292,316.

July sales of all property types in Houston totaled 8,571, down 8.6 percent from the same month last year. Total dollar volume for properties sold in July fell 9.0 percent to $2.4 billion.

Houstonâ€™s monthly housing indicators were mixed in July compared to a year earlier. On a year-over-year basis, single-family homes sales and total property sales were down along with total dollar volume, the median price reached a record high for a July while the average price dropped slightly and inventory grew to the largest level in four years.

Month-end pending sales for single-family homes totaled 7,979, an increase of 11.4 percent compared to last year. Total active listings, or the total number of available properties, at the end of July climbed 12.7 percent from July 2015 to 37,952.

Single-family homes inventory jumped from a 3.5-months supply to 4.0 months, the highest level since November 2012 when it stood at 4.1 months. For perspective, housing inventory across the U.S. currently stands at a 4.6-months supply, according to the latest report from the National Association of Realtors (NAR). 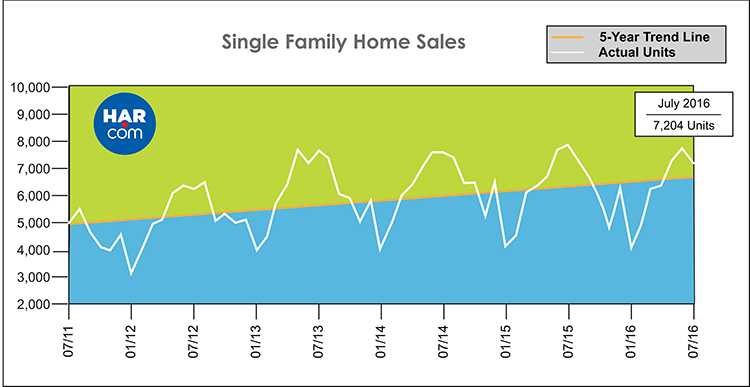 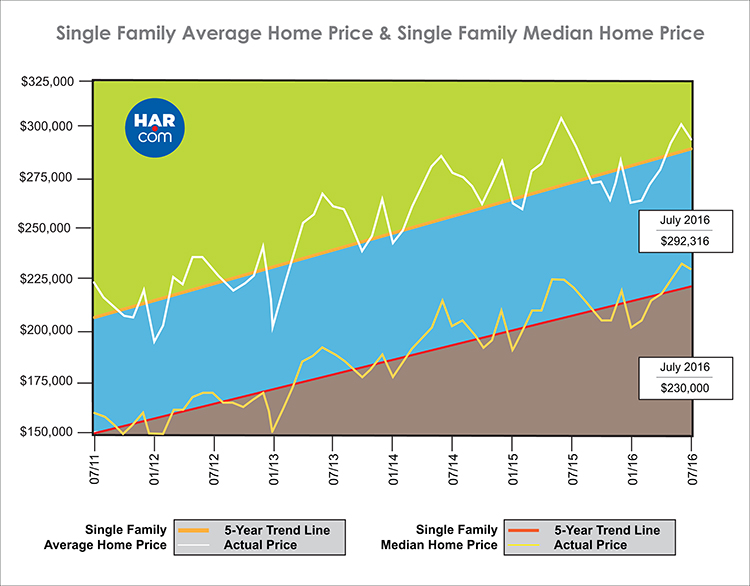 HAR also breaks out the sales figures for existing single-family homes. Existing home sales totaled 6,143 in July, down 10.3 percent versus the same month last year. The average sales price was flat at $274,861 while the median sales price rose 6.1 percent to $217,500.

Houston Real Estate Highlights in July
The computerized Multiple Listing Service of the Houston Association of REALTORS® includes residential properties and new homes listed by 32,000 REALTORSÂ® throughout Harris, Fort Bend and Montgomery counties, as well as parts of Brazoria, Galveston, Waller and Wharton counties. Residential home sales statistics as well as listing information for more than 50,000 properties may be found on the Internet at https://www.har.com.