HOUSTON — (April 13, 2016) — Despite continued strains in the oil patch, the Houston real estate market demonstrated more sustainable conditions in March, with positive sales among mid-range homes and a growing supply of homes from which buyers can choose.

According to the latest monthly report prepared by the Houston Association of Realtors (HAR), March single-family home sales declined 2.2 percent versus March 2015, with a total of 6,001 sales compared to 6,137 a year earlier. On a year-to-date basis, however, home sales are 1.0 percent ahead of last yearâ€™s pace. New listings helped boost inventory from a 2.8-months supply to 3.6 months.

â€œOverall home sales held steady throughout March, and much of that may be due to an influx of new residents throughout the Houston area even as the energy industry suffered more layoffs,â€ said HAR Chairman Mario Arriaga with First Group. â€œPositive home sales in the $150,000 to $250,000 price range and increasing housing inventory suggest that we are in a more sustainable market.â€

In its April 2016 report on the Houston economy, the Greater Houston Partnership (GHP) cited U.S. Census Bureau data showing the Houston metropolitan area leading the nation in population growth in 2015, with the addition of over 159,000 new residents. GHP stated that since April 2010, Houston has added over 736,000 residents and that energy industry layoffs have been offset by job creation in other sectors.

Home prices showed mixed readings in March. The single-family home average price declined 1.6 percent to $272,658. The median priceâ€”the figure at which half of the homes sold for more and half sold for lessâ€”rose 2.4 percent to $215,000, the highest price ever for a March.

March sales of all property types in Houston totaled 7,375, down 1.0 percent from the same month last year. Total dollar volume for properties sold in March fell 2.5 percent to $1.9 billion.

Houston's monthly housing market measurements were mixed in March compared to those from a year earlier, but still demonstrate what are considered more sustainable market conditions. On a year-over-year basis, single-family homes sales, average price, total dollar volume were down while inventory levels grew and the median sales price rose to a March high.

Month-end pending sales for single-family homes totaled 8,018, an increase of 4.9 percent compared to last year. Total active listings, or the total number of available properties, at the end of March shot up 21.0 percent from March 2015 to 34,504.

An increase in new listings in March gave single-family homes inventory a boost, with levels climbing from a 2.8-months supply to 3.6 months. For perspective, the national supply of homes reported by the National Association of Realtors (NAR) currently stands at 4.4 months. 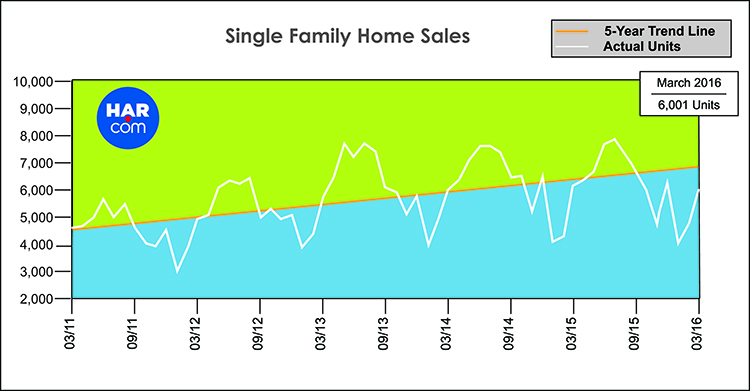 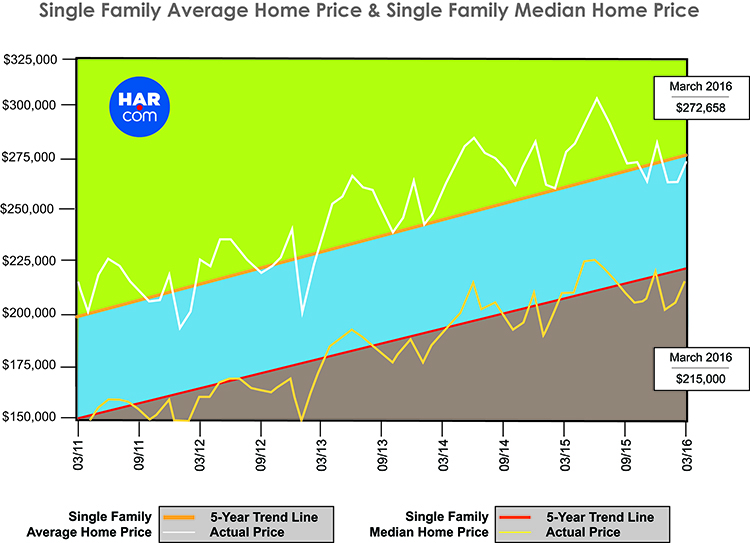 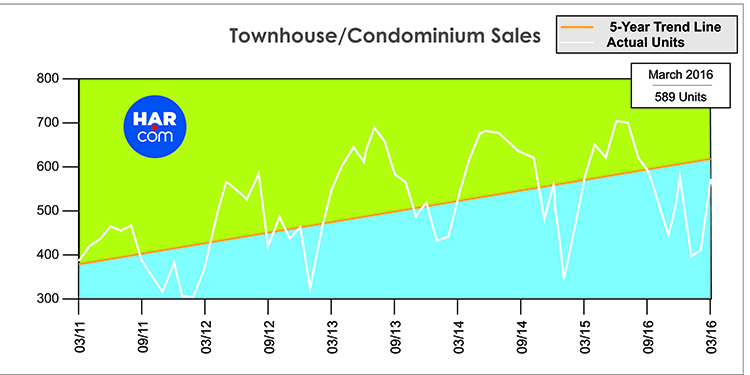 Houston Real Estate Highlights in March
The computerized Multiple Listing Service of the Houston Association of REALTORS® includes residential properties and new homes listed by 32,000 REALTORSÂ® throughout Harris, Fort Bend and Montgomery counties, as well as parts of Brazoria, Galveston, Waller and Wharton counties. Residential home sales statistics as well as listing information for more than 50,000 properties may be found on the Internet at https://www.har.com.