HOUSTON — (December 9, 2015) — The onset of the holiday shopping season and continued strains within the energy industry weighed on Houstonâ€™s housing market in November. Home sales fell for the second consecutive month and dragged average price down with them, marking the first price decline since February 2012.

According to the latest monthly report prepared by the Houston Association of Realtors (HAR), November single-family home sales slid 10.5 percent with a total of 4,595 sales compared to 5,135 a year earlier.

Only homes in the $150,000 to $250,000 price segment experienced positive sales volume. That, coupled with a 22 percent drop in luxury home sales, accounted for the decline in average price. Among homes that did sell in November, Days on Market (DOM), or the number of days it took the average home to sell, edged up to 55 days versus 54 in 2014.

Slower sales allowed for a slight improvement in months of inventory, the estimated time it would take to empty out current active housing inventory based on sales over the previous 12 months. It grew from a 2.7-months supply last November to a 3.4-months supply. Inventory has held at about a 3.5-months supply for the past five months and remains below the current national housing supply of 4.8 months of inventory.

While the average price of a single-family home fell 3.5-percent year-over-year to $262,064, the median priceâ€”the figure at which half the homes sold for more and half for lessâ€” reached the highest level ever for a November, rising 2.2 percent to $200,000.

â€œThe Houston housing market saw further correction in November and will likely exit the year with exactly the declines that were forecast coming off record-setting sales in 2014 and an environment of limited inventory and plunging oil prices,â€ said HAR Chair Nancy Furst with Berkshire Hathaway HomeServices Anderson Properties.

Month-end pending sales for single-family homes totaled 5,617, a 6.3 percent drop from a year earlier, which is an indication that sales will likely remain in negative territory when the December numbers are tallied. Active listings, or the number of available properties, at the end of November rose 21.5 percent to 33,272.

Houstonâ€™s housing inventory has held at about a 3.5-months supply since July of this year, up from the 2.7-months supply recorded in November 2014. That level still remains below the current 4.8-months national supply of homes reported by the National Association of Realtors (NAR). 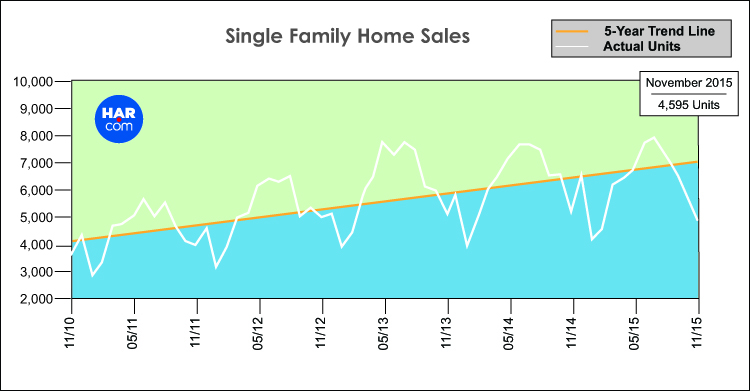 Single-family home sales totaled 4,595 in November, down 10.5 percent from November 2014. That marks the second straight monthly decline, although there have been a total of six months of negative sales for all of 2015.

The average price fell for the first time since February 2012, declining 3.5 percent to $262,064. However, the median price achieved the highest level ever for a November in Houston, rising 2.2 percent year-over-year to $200,000. The average number of days it took to sell a home, or DOM, was 55 in November versus 54 days a year earlier.

For perspective, single-family home sales tracked on a year-to-date basis were down 1.8 percent at 67,771. 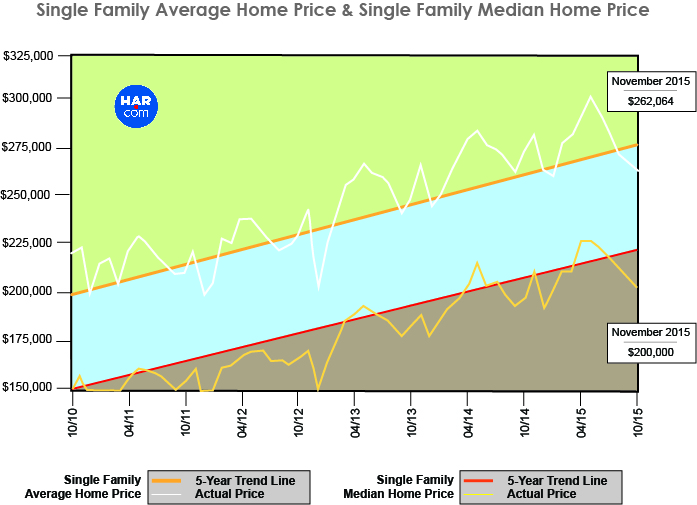 Houston Real Estate Highlights in November
The computerized Multiple Listing Service of the Houston Association of REALTORS® includes residential properties and new homes listed by 31,000 REALTORSÂ® throughout Harris, Fort Bend and Montgomery counties, as well as parts of Brazoria, Galveston, Waller and Wharton counties. Residential home sales statistics as well as listing information for more than 50,000 properties may be found on the Internet at https://www.har.com.